Keith Boyd is a young entrepreneur with non-verbal cerebral palsy which has kept him from talking but hasn’t kept him from dreaming, planning and turning his dreams into reality. Keith was originally introduced to our team by Thrive15.com Mentor and 2-Time Guinness World-Record Holder, Arthur Greeno. Arthur explained to us that Keith was a great young man who came to him with a question, “How can I turn my single stand lemonade stand business into something bigger?” And this is where the fun and the work always begins. Once a business owner or entrepreneur begins to ask themselves, “How can I start or grow a successful business?” their lives always begin to change.

In order to help Keith succeed we immediately introduced him to the www.Thrive15.com online education platform (a business education website that provides mentorship from millionaires and everyday entrepreneurial success stories), The Apothecary Shoppe of Tulsa, Juliet Films and Tulsa Videographers, Epic Tulsa Photography, and countless other clients, business colleagues and associates.

As Arthur and Keith lead the way we were able to assist them in countless ways including:

1. Logo Design – Keith’s goal the entire time was turn his single lemonade stand into a booming business that would create the revenue needed to financially sustain the Little Light House Charity which helps to care for and educate kids with physical and mental disabilities.

2. Website Creation – We worked with Keith and his family to create a website that would capture the innocence, simplicity and sincere joy that Keith and his team have for providing a quality product to the region into exchange for the funds needed to give back to the Little Light House. Once the site was built we’ve helped them with the on-going maintenance of the site so that they can focus on selling and distributing their product.

3. Branding – When we first heard that a 10 year-old boy had taken the time needed to write a business plan we were impressed. But, when we heard that his plan was to earn enough money to give back over $100,000 to the Little Light House Charity we were blown away. We also understood something. A ten year old boy had found his purpose and was standing for something. Thus, the slogan was born, Keith’s Lemonade Stand. Stand for Something.

4. Sales Revenue – Ultimately in the world of business nothing matters until something is sold. With the Keith Project we helped to organize various distribution locations and a team of volunteers who were willing to sacrifice their time and energy on a volunteer basis to help insure the success of Keith’s Lemonade Stand. Nearly everyone knows a person or a family that is impacted by physical disability and thus we found hundreds of volunteers who were looking to show their support for a kid like Keith who had was refusing to be a victim, and sincerely desired to become a victor.

5. Organization Setup – While working with Keith we helped his team to develop a public relations team devoted and focused on helping to share the story of the team’s success with the city, the region and the surrounding communities. Eventually we were blessed to receive a full sponsorship from the good people at Fox23, based in Tulsa, Oklahoma. This television station donated thousands and thousands of dollars of advertisement and media time to celebrating and promoting the story of Keith’s Ice Cold Beverages.

6. Public Relations – At Make Your Life Epic Tulsa Public Relations we view public relations as nothing more than gift-wrapping. To quote America’s PR expert and guru, Michael Levine, “If you give someone a present, and you give it to them in a Tiffany Box, it’s likely that they’ll believe that the gift has a higher perceived value than if you gave it to them in no box or a box of less prestige. That’s not because the receiver of the gift is a fool. But instead, because we live in a culture in which we gift wrap everything; our politicians, our corporate heads, our movie and TV stars and even our toilet paper. Public relations is like gift wrapping.”

While working on Keith’s project our entire focus was on making sure the community had the opportunity to learn about Keith and his Ice Cold Beverages / Lemonade in a favorable way. Some examples of the public relations results that we were able to generate for this project include: 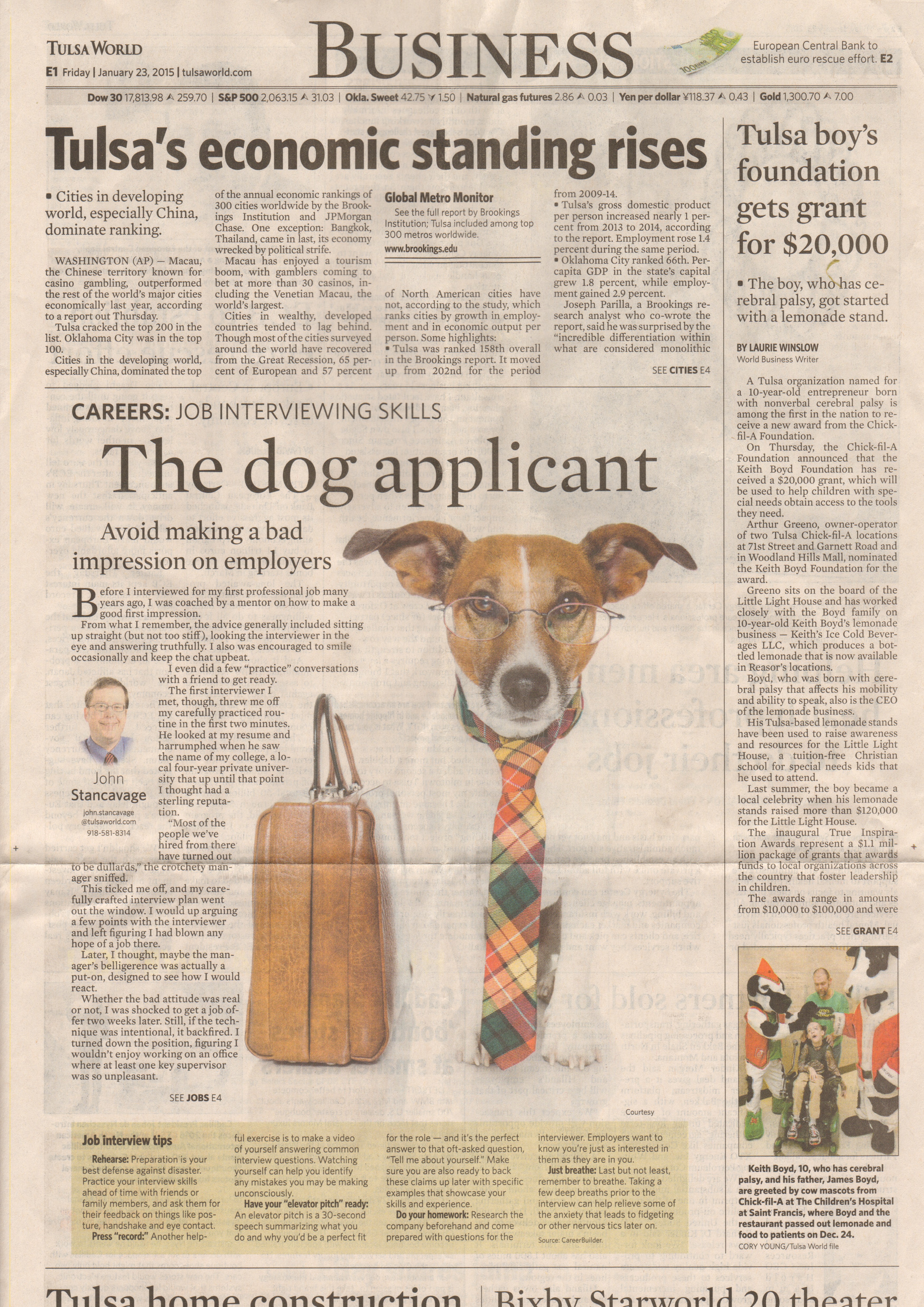 7. Non-Profit / Volunteer Organization – When working with Keith Boyd and his family, we quickly discovered their sincerity about the project and helping kids in need. Keith is unique because he has non-verbal cerebral palsy, but his passion for giving back to help others in need is what really got our team inspired to work with Keith. Over a period of months our team worked along side Keith, Arthur Greeno and his team to assemble a small army of volunteers who were looking for a way to give back and help those in need. The results speak for themselves, but the commitment of the volunteers is worth speaking about. However, at the end of the day, all we can say is “Thank You.”

8. Professional Tulsa Videography – Whether people should judge a book by it’s cover or not, they often do. And thus incorporating world-class videography, editing and production into any project is very important. The good folks at Juliet Films and the Thrive15.com team Videographers volunteered countless hours of their time to produce powerful videography footage that was created to share the story of power of entrepreneurship and the importance of giving back that Keith taught us all.

9. Professional Photography – Today most people with a pulse have a phone that has some type of camera on it. However, random digital photographs taken by people nearly always do not tell the story in a compelling way like a good photojournalistic photographer does. For this project we teamed up Keith with the fine folks at Epic Tulsa Photojournalistic Photography and they produced quality photos that were far and above anything that we could have expected.

10. T-Shirt Design – T-shirts can really make the dream work. They can quickly unify a group of volunteers in a way that few other tangible products can. Our team of designers worked with Keith and his family to develop designs that could clearly and concisely share the story of his vision in a compelling and meaningful way. As the momentum for this project took off, people all over Tulsa could quickly spot a Keith’s Ice Cold Beverage Company volunteer by the just seeing the yellow branded shirts that all of the volunteers were wearing.

11. Sticker Design – Creating stickers that allowed people to show their support for this project was absolutely huge for this project and numerous other projects we’ve worked on over the years. When people drive around town and spotted even one sticker for the movement they began to feel encouraged that they were making a difference and that Keith’s Ice Cold Beverages / Lemonade Stand was a movement that was growing.

12. Securing Sponsorships – As we all know everything that happens in America costs money and Keith’s vision was no different. In fact his vision was to raise over $100,000 for the Little Light House, and the costs to do this were staggering. These costs would have proven to be overwhelming if it wouldn’t have been for the extreme generosity demonstrated by countless Tulsa area businesses that we reached out to  including: